Keeping with the Indie Theme, Journey is another award-winning epic that became free to download recently. The game is a quest into artistic beauty and is arguably the indie title that defines what an indie genre is about. Simple, eloquent, with a keen focus of one particular thing. A game like Journey is a project that the Triple A developers would shy away from because isn’t not a guaranteed profit and overall a huge risk. It came out by in 2012 and was praised by gamers and non-gamers alike for being an artistic masterpiece. Some said it was storytelling for the modern era while others praised it for its simplistic yet eloquent art style. I personally fall more so in line with the simplistic and eloquent design crowd.

This may start becoming a recurring theme here on this blog but in my opinion the gaming world is not what it used to be. It’s become heavily commercialized, rigidly structured, and so meticulously carved up that it’s becoming harder and harder for me to truly enjoy a video game. This is probably why the indie genre seats so well with me as it’s none of that and instead takes from golden years of gaming improves of it with adding more interactive entertainment while still maintaining the classic look and feel of the old consoles.

Journey is a classic quest to a reach the top of a mysterious mountain is the distance. You play as an equally mysterious character who wears a red robe and looks like a cross between a cat and fish but without the whiskers. There’s no real backstory to this character or where or why the character is in this mysterious land. All that is known is that we are compelled to reach the top of this mountain in the distance. This lack of information drives the player to willingly explore and learn more about the character and land their in without being directly told by a objective list. it also encourages players to take paths they wouldn’t normally take and teaming up with other players in hopes that they can share some insights. 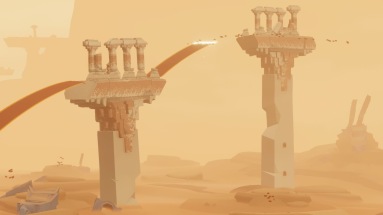 Yes, there is multiplayer in the this but unlike traditional multiplayers, players don’t team up and kill everything in sight but instead collaborate with one another to discover new paths and abilities. Truth be told when I first broadcasted the game and encountered another player I actually thought they were an AI bot as they didn’t have a gamer tag above them and behavior like an AI bot would going straight the levels without stopping to explore. It wasn’t until after the game was over and it then showed me the player’s names  that I realized I was actually online.

On my second play through however, I came across many players each varying in skill level from beginners all the way up to elites wearing white robes and spending their days meditating atop the ruins by the sand ocean. The game is surprisingly social with players continuing to journey to the mountain top even after seen the reward at the top gaining new insights each time about the character and the world there in. During my second play through, I not only met a white robe elite but also teamed up with fellow explorer and together we journeyed to the mountain top as team. We aided each other when things got tough and he guided me to serial new paths I never knew. This means no two journeys will be the same you can wrap to the end after your first play through or start from the beginning, you can explore in solitude or search out other player to team up with.

The game mechanics are also non-traditional with no health bars, energy gauges, or even a map to direct you. On the PS4 you can move the camera with the controller’s tilt sensor. Also, the LED light on the controller changes color depending on what stage you’re on. The Character interact with the world through telepathic messaging, and the moves with a cat like reflexes making very little impact on the ground when walking and guilds through the air with fish like fluidness.

The environments our character interacts with are all covered in sand make this sand  the central medium in which everything revolves around. Throughout each stage the sand changes the way it feels and moves from large and steep dunes that engulf the ancient ruins, to free-flowing rivers that carry out character through an ancient city. It even takes the form a seabed while in the depths of a tomb before becoming powder snow as you reach the mountain stage. These changes are amazingly subtle but add so much to the stage that it completely changes how you play them. My favorite stages are the river and Underground sections as these are where I had the most fun and were the most frighten as the underground is guarded by an ominous presence yet is arguable the most breath taken of the stages.

Breath taking is certainly the phase that best describes this game. One could spend hours taking screenshots of each stage or simply admire their beauty as a whole. The music is also inspiring with soft subtle melodies that then morph into a grand orchestra of notes and progressions especially the finally stage and credit reel. I highly recommend download this soundtrack from ITunes or google play store and I highly recommend this game to all who hadn’t played it. It may not be free anymore on PlayStation but It’s worth the dollar amount and more in my opinion.